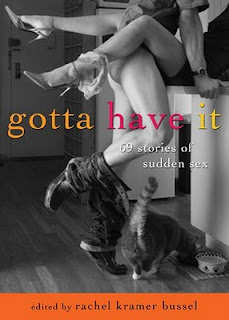 
How do you measure time? You don’t feel it passing, because time has ceased to be measured in seconds or minutes or hours. Instead it is counted in the ticktock of heartbeats, in the pendulum swing of thrusts, on the sudden high-pitched cry that bursts out like a cuckoo from a well-wound clock.
“Tme” by Cecilia Tan

Do you have time for a quickie?

That is the question that Editor Rachel Kramer Bussel asks – and answers! –with her new anthology, GOTTA HAVE IT: 69 Stories of Sudden Sex.

These stories are “short, sweet and totally sexy.” They are also bold, passionate and lusty. Most are only about two pages long but as Ms. Kramer Bussel states: “readers don’t need long to get drawn into the drama, tension and lust.”

The cover is as hot as the stories – risqué and all about satisfaction.

What else can be said of this anthology? You Gotta Get It!
Posted by Native NYer at 8:04 PM