Lila, a Babeland Sex Educator, was an excellent presentor, and she had great props too. Here's the JimmyJane Lineup: 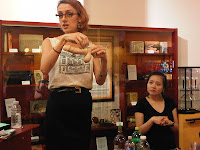 Lila proceeded to demonstrate some of the vibrators on props.  Plus, she gave tips as to how to introduce the toys into the bedroom (be truthful and adventurous); and, what is the best position to be in to use the JimmyJane toys -- the Confessional.
The Confessional is where one partner is seated and the other kneels before them.  If you want to add kink to the position, try a blindfold or restraints.
After the "lecture," we were free to wander around the store and play with the toys.  Here are some that were irrestible.  The Sir Richard condoms were my favorite.  Had to buy a six-pack for future use. 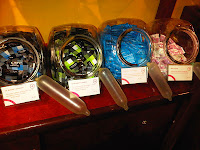