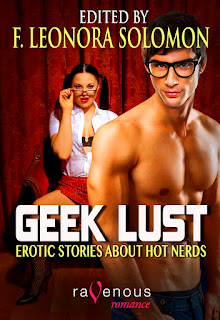 A bowtie
A rekindled love affair.
A sexy encounter.....
.....you will never believe where!

I am happy to report that my new erotica story, "Geeky Bowtie," will be included in the GEEK LUST anthology to be released on Decmeber 28 by Ravenous Romance. This anthology was edited by the fabulous F. Leonora Solomon.

Here's a quick excerpt for your reading pleasure:

It was the bow tie.
He looked like a geeky old college professor with his maroon bow tie. A beige suit, sky-blue shirt, brown leather shoes covered Steve's lanky body. That suit hid a lot. A slim body, soft hairy chest and a dick of iron.
Anne remembered it well. She knew her men. She had cooled it off with Steve after a few sessions of the same old, same old. He just wasn't as inventive in bed as he could have been.  And he abhorred public displays of affection.   Not that Anne was into PDAs herself, but a spontaneous kiss was no reason for a public meltdown. So she had cooled it with Steve for the past couple of months.
But that bow tie made him look sexy. And when he ran his hands through his hair leaving it rumpled, Anne could see it against her pillow after a hot ride on his cock.
Umm. Just thinking about it made her wet. She could feel the lips of her vagina plumping, and desire snaking up her spine. She wanted him now.
But where? They both worked for a hedge fund but neither had offices. Theirs was an open seating plan.  Oh, what she wouldn't give for a soft couch and a locked door right now!
Anne's face lit up and as pushed back from her desk. She put an extra wiggle in her step as she passed Steve, who sat two cubicles away and in front of her.
His eyes met hers. Desire heated his gaze. A gaze that quickly ran over her form, lingering on her breasts, down her stomach, to her strong thighs courtesy of weekly zumba classes.
Anne passed Steve and couldn't help but bump his shoulder with her hip.  It had been their secret signal.
She felt him looking at her. She always knew when he looked at her ass.  She sent him an extra wiggle.  Anne continued to the office manager's desk as Steve left the floor.
She had just twisted the key in the lock, when Steve appeared behind her. No sooner did she walk into the supply closet that he had her up against the wall and his cock against her crotch.

To read the full story, get the book, GEEK LUST, at www.ravenousromance.com.