We are pleased to welcome the legendary Alice Orr to our website
as part of our Hot Summer, Hot Excerpts blog tour.
Visit us every day this week for more sexy excerpts.

Mark saw the tenderness in Hailey’s eyes and couldn’t hold back any longer. He pushed himself out of his chair and crossed the kitchen to where she stood with her back against the counter. She saw him coming, but she didn’t move. He touched her arms and felt her stiffen. The scarf around her neck reminded him of what had happened to her just this morning. Actually, he hadn’t forgotten it for an instant all day long.


Suddenly, the reluctance he’d felt in her was gone. She rose onto her tiptoes and put her arms around his neck. Their lips met, and he lifted her the rest of the way off the floor. Her body was pressed tight along his body, from his thighs to his chest, and he felt her nipples turn hard through the material of his shirt and hers. He was turning hard also, and he knew she must feel that too. She didn’t pull away. She tightened her arms around his neck and moved her body slowly from side to side, grinding her breasts across his chest and her hips against his hips.


Mark slid his hands down her back to cup her buttocks and lift her higher against him and then onto the counter. His tongue was deep in her mouth now and she circled it with her own. They were both breathing heavily. He leaned back just far enough to reach the hem of the top she was wearing, but she removed her arms from his neck and beat him to it. She pulled her mouth away from his to peal her top over her head. Underneath, her breasts strained against her bra, and he could see the dark crests of her nipples through the white lace.


She was ahead of him again, reaching between her breasts to release the hook there. The fullness of her flesh pushed past the lace, and she teased it further backward with her fingertips until her breasts were free. She reached beneath them, one in each hand, lifting them toward him. Her nipples were erect and red. She looked down at them, and he watched as she moved her thumbs from the pale roundness of her skin to the hard redness of each nipple. She stroked back and forth, still watching herself and arching her back toward her own touch. She dragged her gaze gradually upward to his face as she continued stroking. Her eyes were glazed and lustrous.


ABOUT THE AUTHOR:  A YEAR OF SUMMER SHADOWS – Riverton Road Romantic Suspense Series Book #2 – is available at amazon.com/author/aliceorr. This is Alice’s 13th novel and she’s thrilled to introduce you to Hailey Lambert and Matt Kalli – a hot pair in the kitchen and everywhere else. Alice Orr – www.aliceorrbooks.com, www.facebook.com/AliceOrrWriter, www.twitter.com/AliceOrrBooks. 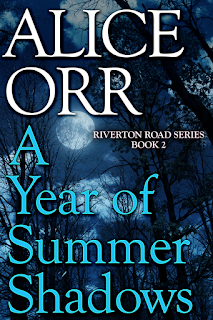