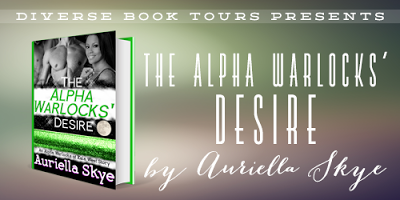 She had me at romance!  And when you throw in sorcery and multicultural, I am doing cartwheels.  Hence, I am happy to say that I am part of the Diverse Book Tours blog tour for Auriella Skye.  Below is an excerpt for all our reading pleasures.
Also, note that DBT is holding a raffle giveaway; the link is below.
Happy Reading and Good Luck!—Del Carmen

SUMMARY:  Curvy witch Claire Brixton is in no mood for a party, especially one that’s supposed to match her up with two strange warlocks. Her experience with one warlock was bad enough.  But when these powerful Alpha Warlocks save Claire from two {other} over-zealous warlocks at the festival, history and the present merge into an encounter that fills them {all} with intense desire.

Claire had nothing on this warlock, who threw Mason so far that she couldn’t see where he landed. That was some strength, and she felt her body tighten in hidden places at the thought of him using that strength on her in more intimate endeavors.

“Can you get out of the water okay?” he asked.

He didn’t wait for her response. The strange man simply scooped her up and walked her out of the water himself.

As soon as her skin touched his, she felt like she was melting from the inside out. Her tongue longed to taste him and lick the lingering salt water off his gorgeous skin.

Claire felt wetness spread between her legs and chastised herself for her wantonness. She didn’t know this man, and already she was geared up to jump him.

Then the cloud slipped past the moon and lit up the face of the man who carried her in his arms like it was the most natural thing in the universe.

He paused just at the water’s edge and turned to her.

Axel looked down at her as if she was a ghost, and he wondered how she remained solid in his arms.

He sat her down on the dry sand, so she stood up on her own, but he didn’t let go of her.

“I’m here? What are you doing here?” she asked.

He didn’t answer. Instead, he used his thumb to trace her lower lip.

Oh, his skin was lovely, and his thumb was absolutely divine.

A groan escaped his lips followed by a satisfying grunt.

The sounds were making her wetter. She had questions for him, didn’t she? But for the life of her, she couldn’t think of one thing to ask him.

He removed his thumb so quickly that she barely had time to balance herself on his wet chest. A very naked chest. Droplets of water still clung to his muscular body.

She looked down and saw that wasn’t the only bare part of him. Axel was naked from head to toe, and, if that wasn’t enough, he was hard as a brick.

Claire glanced back up and saw a shimmer of blue the color of day skies lining his irises.

He was filled with magic, and if she wasn’t mistaken, he was turned on by her. His chest rose and fell with difficulty, as if he had just ran a marathon, and Claire’s face was close enough to kiss that powerful chest.

Before she could say anything else, he guided his arm around her back, lifted her slightly on her tiptoes, and brought her lips to his.♥

ABOUT THE AUTHOR:   Auriella Skye dreams of becoming a powerful goddess and creating a whole pantheon of gods to do her naughty bidding. Until then, she happily spends her time weaving those fantasies into the erotic and fun tales that she enjoys reading as much as writing. She loves creating characters and worlds filled with the wonderful stuff reality lacks. In her spare time, she enjoys reading romance novels from other awesome authors, hanging out on social media, and watching movies. Auriella appreciates science fiction, action adventure, and mythological films, especially ones with sexy alpha males as the heroes. Auriella resides in Central Florida and spends her days and nights surrounded by words in their various, spectacular forms.